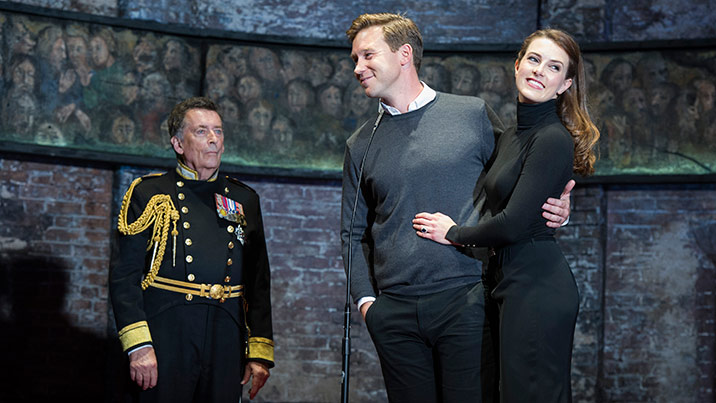 Charles and his family gather following the funeral of Queen Elizabeth II. He then holds his first weekly audience with the Prime Minister, principally discussing a new bill for statutory regulation of the press. This has passed the House of Commons and the House of Lords and is only awaiting Charles’ royal assent to become law. Charles, however, expresses doubts that the law restricts the freedom of the press too much and would allow governments to censor the news and prevent legitimate uncovering of any abuse of power by the government. He asks the prime minister to reconsider the bill but he refuses and the two part, as the Leader of the Opposition arrives for a weekly meeting with Charles, an innovation the new king has introduced. The Leader of the Opposition expresses his own doubts on the bill and leaves Charles to make his decision.

In parallel, Prince Harry has begun a relationship with a republican named Jess and both Charles and Prince William have seen the ghost of Princess Diana, promising each man that he will become “the greatest king of all”. The following day, The Prime Minister receives the bill with ‘Assent Reserved’ written in place of Charles’ signature. The Prime Minister holds a crisis meeting with the Leader of the Opposition and then goes alone to try to convince Charles to sign, but he continues to refuse. The Prime Minister then threatens to pass a new law bypassing the royal assent and then pass the press law, but Charles dissolves parliament before he can bring either of these plans into effect.

Protests begin across the country and especially in London. Charles increases the army guard at Buckingham Palace, offers his protection to Jess (whom the media have made the centre of a sex scandal) and agrees to Harry’s wish to become a commoner. The Duchess of Cambridge (Kate Middleton) plans a solution, which turns out to be William publicly offering himself as a mediator between parliament and his father. He announces this at a press conference without his father’s knowledge or consent. Seeing this as a betrayal, Charles reacts angrily and the stage is set for a final confrontation.

This synopsis is part of the King Charles III program, which also features: