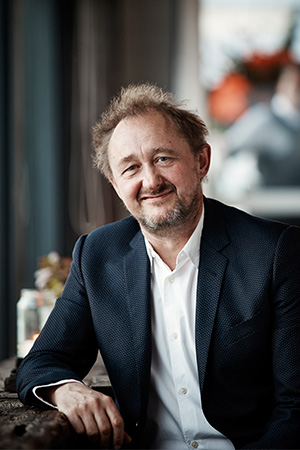 Our former Artistic Director joined us on the phone from the UK to discuss the art of adaptation, his love of Chekhov and how Bob Dylan comes in to the picture.

This is an excerpt from an interview that appears in the printed program for Three Sisters. Read the full article when you pick up a program for $10 at the venue.

When you set out to adapt a play, how do you begin?

There are two layers to it. First, if I don't feel a connection to a story, I'm not going to put myself forward as the adapter. Generally, I will know if that connection exists from reading the play. Everyone who works in theatre has read Chekhov's plays, so with Three Sisters I knew straight away. So, I want to find that connection and think, 'I can do that'. That’s always been the case – before I was adapting regularly and before I was running a company, I was reading lots of plays and, when I connected to them, I would get an urge to muck around with them. Given I can't act, the only way I could muck around with them in a creatively satisfying way was as a writer.

The second layer is something I’m more aware of now, later in my career, and that is the connection to the director, which actually matters most. For me, every adaptation is a transient object, just as transient as the production itself. The original script is an object, it sits in time and space – it's often culturally revered, entombed and enshrined – whereas a production is a free object that sits only inside the time that it takes place. I see every adaptation I make as being fundamentally linked to a particular production. So, that means I really have to connect with the director and what they want to do with the work. With Three Sisters, Kip approached me about doing the adaptation and I in turn approached the play through the lens of the production I knew Kip was going to do.

One of the striking elements of this adaptation is your use of Bob Dylan lyrics. It certainly pulls us forward in time but it also echoes the way in which Chekhov has Vershinin and Masha quoting Pushkin and Tolstoy to each other as a form of flirtation. What led you to Dylan as the contemporary poet of the heart?

Very early in Act 1, Masha is humming a song to herself. That song is clearly a folk song, so I did a little bit of research and found how around the time that Chekhov was writing, the trend amongst the culturally sophisticated classes in Russia was to advocate for peasants and folk culture. They would dress in traditional folk costumes, sing the folk songs. Masha is a sophisticated, educated woman, but she is also stranded in the middle of nowhere, so there's a tension for her as to how pleasurable that folk music might be. I knew Kip wanted the play set around the 1970s, so I thought Bob Dylan’s early work as a songwriter fits right inside that time and the bourgeois idea of getting to know the working class. So, my initial attraction was that I loved ‘Man of Constant Sorrow’, a folk song that Dylan recorded a great version of, and I wondered if perhaps the sisters’ mother used to play it. I imagined Dylan being a part of the fabric of their family life, while also reflecting the way in which they are sophisticated people in a very unsophisticated environment. And that's the tension.

Helping to solve the question of Masha’s folk song in Act 1 was how Dylan first touched down in the script. Then, I knew that I needed to find something for Vershinin and Masha to hook onto, but I didn't know until Act 3 that it would also be Dylan. The more of the play I wrote and the more I dug into it, I realised there was something about the fine line Dylan walks between being sophisticated and unsophisticated, between being naive and incredibly well constructed that could be very potent. I think it’s at its best in his love songs, which are phenomenally vulnerable and endearing, and incredibly witty and ‘cool’ in the Marshall McLuhan sense of the word. That got me to Blood on the Tracks, which I think is his great broken heart album. I could imagine that if you met someone across time, as Vershinin and Masha do, and found that they shared a favourite song from the album, then that would immediately become a currency between them. And there are so many beautiful images inside Dylan's love songs on that album that, even if you don’t know it, the words will resonate with you as an audience member and you feel the aptness of the lyrics for Masha and Vershinin.

Three Sisters is variously talked about in terms of loneliness, in terms of failure, in terms of finding out how best to live a life. What for you has been the driving force that propels the drama for you?

I kept coming back to loss. And it surprised me. Because of the Penguin translations we study at school, Chekhov’s plays have a patina laid over them that makes it hard to distinguish their individual voices – but having now worked closely on Three Sisters, The Cherry Orchard and Uncle Vanya, I can see how different those three plays are.

The Cherry Orchard is funny but tragic and full of manipulation and bile. Vanya is hilarious – filled with gallows humour – but also sorrow and failure. But, what I kept finding in Three Sisters was anger and a much, much scarier play than the other two. Chekhov was sick when he wrote this, and I think he must have been coughing up a lot of blood because it's relentless about death and loss. He seems to be not only saying, ‘you can't take it with you’, but also ‘you don't even have it when you go’. You lose and lose and lose all the way through this play. It's terribly upsetting but to me, that's its big orchestral overarching tone.

When I say that Three Sisters has anger inside it, I don't mean a shouty, screamy rage, I mean a deeply felt sense of anger at the corrosion of time, the hammering weight of loss. All the characters suffer from it, hide from it, lose themselves in it and, most importantly, do it to each other. It's not a bitter play at all. It just is what it is. It's the human condition.

Read the full interview with Andrew Upton in the printed program booklet for Three Sisters, which also features: