Gallery: Journey to 1890s Australia for The Torrents 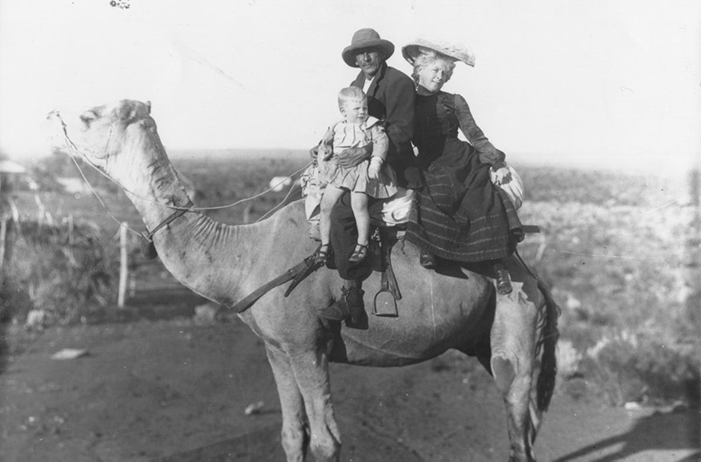 Though its themes of sustainabilty, the role of journalism, and gender politics in the workplace are eerily relatable to our twenty-first century urban lives, period drama-comedy The Torrents is, in many ways, another world away.

Set in a newsroom in the fictional Australian town of Koolgalla in the 1890s, it brings to life a distant era when at one point, the nascent Western Australian gold mining towns felt like the centre of the universe, and the new frontier. A particularly fruitful strip of land east of Perth had become known as The Golden Mile, and its rumoured riches had drawn thousands to Western Australia, where towns were growing at a remarkable pace around gold mine sites.

As The Torrents director Clare Watson acknowledges, this period piece, written in the 1950s by Australian playwright Oriel Gray, was inspired by the sights and sounds of the Kalgoorlie-Boulder-Coolgardie area Gray visited herself more than seventy years ago. "In the 1940s, Oriel spent time in Kalgoorlie, which has inspired the fictional town of Koolgalla. The character of Kingsley also bears some remarkable resemblances to our local hero C.Y. O’Connor.” The O'Connor she mentions was responsible for a landmark irrigation scheme, which you can read about more below.

Inspiration for The Torrents designer Renée Mulder's set and costumes can also be found in the images below. She says: "the world of The Torrents is inspired by office spaces of the Victorian era and based loosely on the office of the Western Argus newspaper published in Kalgoorlie between 1894 and 1938".

We invite you to journey through the dusty world of these turn-of-the-century Western Australian gold mining towns - Kalgoorlie and beyond. Peek inside office interiors and personal portraits which inspired the set and costumes, and read from local papers which provide a fascinating insight into the mood and priorities of the time.

To best enjoy this once-forgotten golden nugget of Australian theatre, take a trip into our nation’s past…

The first page of a detailed article in the 1898 Western Mail Christmas Edition, based in Perth, on the rise of WA gold mining town Kalgoorlie. Even in the opening paragraphs, we can see how highly Australia's gold yield was valued, with entire town populations, infrastructure and folklore grown and moulded around its pursuit.

"KALGOORLIE was gazetted as a municipality on the 5th of May, 1895, so that at the present time it is a mere infant in the matter of age among the cities of Australia. Its growth, however, has been marvellously precocious, and already it can shake its cap and plume its feathers with the pride of possessing things which do not belong to many older cities. For has it not a miniature auriferous empire at its door, out of which tons of gold are annually extracted? Are not its mines the envy of other districts and the admiration of all the eminent mining authorities of the globe? Are not its potentialities the theme of mineralogical prophets, and do they not form the groundwork of brilliant articles by statistical scribes, who take gold for the text, the exhortation, and the peroration?"

"Agriculture may be, as is frequently asserted, the noblest of all alchemy, turning earth, and even manure, into gold, and conferring upon its cultivator the additional reward of health, but it is the search for and the lust after gold which converts the desert into a populous region, fills the remote and sterile corners of the earth with the machinery of civilisation, builds cities as if by magic, and stirs into a whirl of feverish activity every ramification of human industry."

"Probably no more potent illustration of the colonising power of gold can be found anywhere in the world than is afforded by Kalgoorlie and the Boulder cities, where, in the short space of five years, a population of 25,000 persons has settled down, every soul entirely dependent for existence, upon the gold-producing capabilities of a narrow strip of ground smaller in area than many a South Australian farm."

A similar prospect, only five years later, showing the rapid growth of gold mining towns like Kalgoorlie around this time.  In view is the Exchange Hotel, corner of Hannan Street and Maritana St looking up towards Mt Charlotte, with the Hocking (Kalgoorlie Miner) building in background, c1900.

Hocking & Co building (Kalgoorlie Miner) Hannan Streeet, Kalgoorlie. Shows part of Exchange Hotel on right. This image is dated to c1920, but would not be too different from the building's early years in 1900.

The interior of the Western Champion newspaper office, Barcaldine, c1890. Though located in Queensland, not WA, it gives an impression of the style of newspaper office at the time. Beyond the doorway, a front garden and white picket fence can be seen.

Interior of stenographers' office, 1897.  Contains desks, a typewriter stand, devices to hold long sheets of paper (presumably used to record dictation in shorthand), and four typewriters.  The typewriters included a Smith Premier No. 2 (left), a Remington Standard No. 6 (right of centre), and a Caligraph with a wide carriage (right).  These Smith Premier and Remington models were introduced in 1896 and 1894, respectively.

Another wedding party, c1900, in front of hessian houses typical of the area.

Group of men and children outside Hannan's "Post Telegraph Office", made from hessian and wood, c1894.

Man, woman and child seated on a camel, c1905. From the beginnings of the WA mining towns well into the 1930s, camels were a common form of transport and labour.

A gold miner's camp under a tree, Kalgoorlie district. Camps were often clustered together randomly, with no infrastructure or hygeine. Typhoid outbreaks were particularly severe.

Another camp in the Kalgoorlie district. Three men outside their tent, 1898-99. The bushcamp tent is made of canvas and covered in brush, with a billy and enamel cup placed in front.

A common means of gold extraction, here stands a man with dryblower, gold pan and sieves by low rock wall (possibly the entrance to a small mine). Building with thatched roof in background, Coolgardie 1895.

Gold bars on scales in the amalgamating room of Peak Hill Goldfield Ltd, W.A., between 1890 and 1899.

In 1898 the local Catholic priest of Kanowna (east of Kalgoorlie), Father Long, started a rumour that he had seen a 45kg gold nugget uncovered, though its finders wished to remain secret. Though it may have been true, we now consider it more likely Father Long was trying to attract prospectors to ensure the growth of the town. At the time, however, people were all too willing to believe, and thousands flocked to Kanowna as word spread. Pictured here, a large crowd gathers outside the Criterion Hotel waiting for Father Long to announce exactly where this "Sacred Nugget", as it came to be known, has been found.

Charles Yelverton O'Connor, c1897 —  an inspiration for the character of Kinglsey in The Torrents. O'Connor was the engineer responsible for the pioneering Goldfields Water Supply scheme, a pipeline and dam project which delivered much-needed water to Western Australia's Eastern Goldfields, particularly Coolgardie and Kalgoorlie. The project was commissioned in 1896 and completed in 1903, and largely devised by O'Connor who oversaw its design and most of the construction project.

Throughout the project O'Connor faced widespread criticism and derision from members of the Western Australian Parliament as well as the local press based on a belief that the scope of the engineering task was too great and would not work. There was also a concern that the gold discoveries would soon dry up and the state would be left with a significant debt to repay with little or no commerce to support it. Sadly O'Connor committed suicide before the final completion of the project, but his successful pipeline survives him, and still operates today.

An article on the past year of mining in The Western Mail' Christmas Edition, 1898.

"An eventful year in West Australian mining is on the point of closing. Its predecessors were noted as chronicling new finds, the opening of new fields, and the rapid advance of the pioneer into the wastes. But 1898 has a somewhat different glory. New finds, fresh districts, and doughty pioneering work, figure in its annals. But its great achievement has been the steady, rapid progress of development. It has, so to speak, "firmed" the discoveries of earlier years."

THE WESTERN ARGUS on the WEST AUSTRALIAN MINING INDUSTRY

An essay by the Western Argus Mining Editor, which hints at the fluctuating fortunes of gold mining towns at the time, revealing their fragility even whilst praising their recent success.

"That West Australia is the premier gold-mining State of the Commonwealth is shown by the fact that her gold production is just about equal to the combined yields of the sister States. Furthermore, it is gratifying to know that her mining industry is very much on the up-grade. At time of writing the gold yield for October has just been announced, and the total is the highest of any month yet recorded."

"Why it is that she is so solidly consistent in her gold yield we cannot say, but the fact remains that West Australia is fast-regaining the confidence of the home investors, and this is a point which augurs well for the future of the State's chief industry. By way of illustrating this returning faith on the part of the English capitalist, we take the following from a London contemporary, which, in commenting upon the Treasurer's Budget Speech, says: "The figures we have quoted really seem to show that the State has recovered from the depression which followed on the wave of prosperity en joyed a few years ago, and has now a bright future before it. Though our faith in the ultimate prosperity of West Australia was never shaken, there was, a year or two ago, ground for real anxiety as to the immedihte future. The permanence of the mines was not as well established then as it is now, and the heavy indebtedness of the State was another factor which occasioned some alarm."