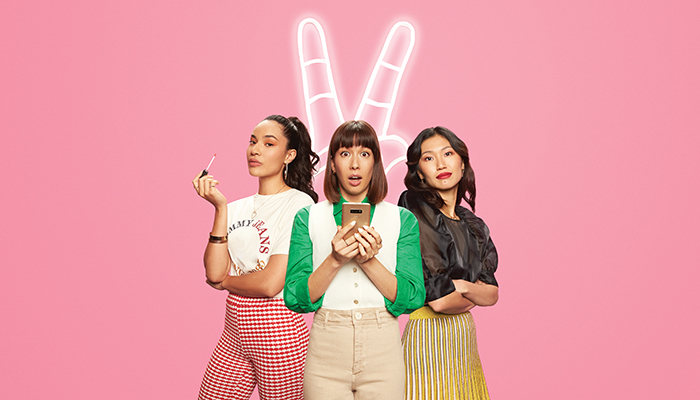 White Pearl is a dark satire that seeks to expose prejudices and racial tensions that exist in the modern business world, and the ways racism can manifest beyond Anglo-European communities.

The play is set in Singapore – a cultural melting pot for people from all over Asia and the world – at the offices of Clearday™ cosmetics. Clearday is a startup company owned and operated by a group of young, highly-powered Asian women from a diverse range of cultural backgrounds, and it's been making big waves in the super competitive, deeply-politicised Asian cosmetics market.

One of Clearday’s most successful products is also one of its most controversial: White Pearl, a cream that promises to lighten the wearer’s complexion. On the day the play takes place, business is ticking along as usual until a crisis breaks out. A new advertisement for the cream, as yet unseen and unapproved by the Singaporean head office, has been anonymously shared online, ‘gone viral,’ and is being roundly criticised for its racist content.

The Clearday team, each with their own perspectives on the ad, and their own views and on culture, identity, and racism, jump into action to avert impending PR disaster. In the ensuing chaos, as public anger grows, the company’s shiny, corporate facade begins to crack and a mess of hidden resentments and prejudices, both personal and historic, begins to seep through. Soon fingers are being pointed and serious questions are being asked: Who okayed the video? Who leaked it? How culpable is everyone involved? What responsibility does the company have to its consumers? And most importantly, who deserves the blame for this catastrophe?

The writer and the producers wish to make clear that the eponymous product White Pearl and the company Clearday™ are entirely fictional and any resemblance to existing products or companies is purely coincidental.

Anchuli Felicia King is a Thai-Australian playwright whose plays have opened to great acclaim in Australia, and globally including in the US and the United Kingdom. Her plays deal with the intersection of identity and technology, and the contemporary condition. White Pearl was the first of King’s plays to open on an Australian mainstage.

In an interview conducted by STC in 2019, King gave us some insights into what to expect from the play, why she chose to write a dark comedy, and what her process was for dealing with difficult, confronting and, at times, upsetting truths:

“I think audiences can expect to see very, very different Asian women on stage – very idiosyncratic, complicated Asian characters. I think they can expect to be challenged and to think about things in a way that they might not have previously. I also think that they can expect to see a good, old-fashioned corporate black comedy, where things just keep getting worse and worse in increasingly horrifying ways.”

Why a dark comedy?

“I feel that laughter is a great way of allowing people to confront uncomfortable realities and particularly uncomfortable realities around race and identity politics. Part of what I’m trying to do with White Pearl is a look at the relationship between humour and power and discrimination and why it is that people in some places find certain things funny that other people don’t. And so it felt really important to me to ‘go there’ with this play and make sure that I didn’t skirt around the reality of what I was talking about.”

How do you manage to find the balance between confronting and offensive content?

“For me it's about having a continual dialogue with the people that I’m building the work with. Theatre is not ‘just me’, it's a whole group of people. And part of why I love working in global [writers’] rooms with lots of immigrant artists, and people of colour, is that we all come from a different perspective and we communicate between our own communities.

If something is walking a line and is pushing people to a point of discomfort where they go ‘oh actually this is unhelpful to the discourse’ or ‘actually this is perpetuating racism rather than commenting on it’ then somebody will say it in the room. And that’s how I know where the line is actually, it comes from a process of consultation. And I think it's also about having the humility to not feel like you’re being judged in the room, and this goes for everyone I work with: if you get up against that line or you butt heads with someone, having the empathy to say ‘your perspective in this conversation is more important than mine’.”

Eye on the themes

White Pearl is set in the office of a startup company.

Due in part to the rise of social media and the proliferation of new internet technologies, the twenty-first century has seen a rapid rise in the number of startups in the market.

Startup companies are often run by young, socially-minded entrepreneurs, and many are celebrated for their democratic office hierarchies, their inclusive hiring practices and their ability to fast-track the careers of young talent.

At the same time, the financially risky nature of startups and their lack of resources also poses serious ethical questions about the pressure and expectations that they place on their employees, their flexible pay structures and their perceived ability to sidestep workplace regulations.

The use of skin whitening cosmetics and medical procedures are common practice in many parts of the world. One report projects that the global market for skin lightening products, currently estimated to be US$8.8 billion, will increase to US$11.8 billion by the year 2026.1

In countries where skin whitening products are in high demand, many local and multinational corporations run advertising campaigns that associate light skin with personal, social and romantic success.

Many cultural theorists argue that, in the centuries since the beginning of European imperialism, light skin has become culturally-important due to the imposition of western beauty standards on global populations.

In some cultures in Asia, skin whitening practices also have a long history intertwined with social class. Historians have argued that, because of the tanning effects of sunlight, some cultures historically linked light skin with wealth and noble birth, i.e. segments of society that did not generally work outdoors. The association of white skin with nobility and beauty also held sway in European society at different points in time, including in the Renaissance that saw many women (including Queen Elizabeth I) paint their faces with toxic mercury to achieve a white complexion.

Discover even more about the play in one of our programs - available for purchase at STC Box Office.