The neighbourhood we know now as Walsh Bay stretches from Dawes Point (called Tar-ra by Aboriginal people) to Millers Point (Coodyee). The area was and remains Gadigal land, though it has been through many transformations, welcoming a diverse array of people in its iterations as a commercial, cultural and residential meeting place. For thousands of years before white settlement, the Gadigal area around the western headland of Sydney Cove was home to the Gadigal people of the Eora nation.

The area was defined by dramatic topography, with steep imposing sandstone cliffs characteristic of its shoreline. This likely provided shelter to local indigenous populations, however limited access to Sydney Cove hampered permanent settlement.

Walsh Bay refers to the historic docks zone around the western headland of Sydney Cove, where British colonists anchored their First Fleet and founded the Port Jackson convict settlement on Gadigal land in 1788. 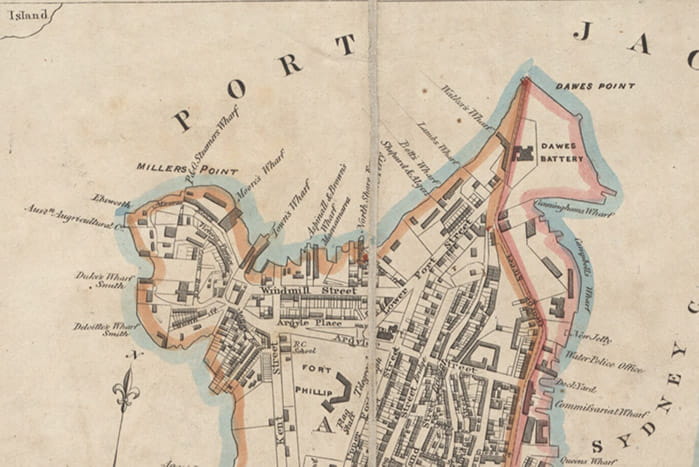 As the colony at Port Jackson prospered, its cargo facilities expanded west from Sydney Cove to the much larger deepwater first named Cockle Bay, then Darling Harbour. This shift began in the 1820s and included the waterfront between Dawes Point and Millers Point: today’s Walsh Bay.

As trade developed, Walsh Bay became the location for some of the first commercial wharves. William Walker built the first wharf in Walsh Bay near the Dawes Point end (now the site of the Pier One Hotel) to assist this trade. The first jetty in the area of Pier 4/5 (now home to STC, Bangarra and Sydney Dance Company) was constructed in 1831 and called Pitman’s Wharf. In the second half of the 1800s, Sydney’s economy and culture was booming and the northern waterfront of Millers Point was one of the city’s busiest shipping precincts. By the late 1860s there were six large wharves along the harbour shore.

The advent of newer and faster modes of transport changed the nature of the maritime industry and vastly improved trade routes and freight times. At first, the development of clipper ships – more like yachts, designed with longer, slimmer hulls – could carry cargo and passengers at much faster speeds than the older boats (250 nautical miles per day compared to 150 nautical miles for older boats). A notable clipper, Cutty Sark, built in 1870, set a record of 73 days to sail from Sydney to England.

Towards the end of the nineteenth century, clippers continued to berth in the Walsh Bay area, but they were beginning to be replaced by steam-powered ships. These ships often also carried sails to save fuel costs on the long voyages, and for use as back-up if the new, often unreliable engines failed.

The growth of trade and the general increase in the size of ships led to the reconstruction of many of the existing wharves. The new settlers of the area brought with them new diseases and a general disregard for the Gadigal people. Within the first few years of British occupation, several thousand Aboriginal people died, victims of smallpox and other infections, or murder at the hands of the new controllers and developers of their homeland.

Sydney’s bubonic plague outbreak of 1900 was first recorded in the areas of Walsh Bay and Miller’s Point, with white settlers accused of triggering the outbreak.

After two men from Ferry Lane in Millers Point died of bubonic fever, the State Government declared a plague across the entire headland and there were large-scale resumptions of land. Rats were understood to be the cause of the plague’s spread, so public health and safety crews were formed to catch rats for per-corpse payments, and wash the streets and buildings.

After the rat plague of 1900, the Government and the newly created Sydney Harbour Trust began a rat-proofing renewal of the shoreline from Miller’s Point to Balmain Point. This renewal involved the complete eradication of plague spots, the erection of new housing, and the reconstruction of Sydney’s Wharves.

The new Wharves were state of the art for their time and were designed to efficiently service cargo-loading onto more than one ship at a time from both the apron level and the first level. It was one of the few wharfage areas with direct access to the Harbour mainstream.

“I do think there’s a lot of evidence to indicate that [the plague] really was the excuse the government was looking for. They had a genuine concern about the state of the wharves, that a lot of the wharves were fairly unsanitary, and more importantly, inefficient. The colony, the nation – we’d just become a nation – had just gone through a major depression and a major collapse in trade and so on, and there was a very strong need on the part of the government to involve itself in efficient trading practices and part of that meant efficient use of the wharves. In terms of Millers Point it meant getting hold of that private wharfage so that it could be redeveloped as more efficient work space.”

It was during this renewal period that the bay was first named on the 1918 drawings of a major new wharfage scheme to modernise all Sydney’s docks to handle steam ships and motor vehicles. The rejuvenation was planned by Henry Deane Walsh as Engineer-in-Chief of Sydney Harbour Trust. Its then chairman, Robert Rowan Purdon Hickson, lent his name to Hickson Road, the new freight thoroughfare around this headland.

It was in the early twentieth century that discussions began about the need for a conduit for motor vehicles between the city’s north and south shores, linking McMahons Point to Dawes Point. And so the Sydney Harbour Bridge was conceived. Engineer John Bradfield designed the bridge with its now legendary style of tied-arch construction. Construction began on the southern access ramp in 1927. The NSW Government minimised its building maintenance program and eventually locked up all the wharves and warehouses. For most of its existence, the Walsh Bay area did not enjoy a savoury reputation. In the 1950s, everyone (except the Millers Point population) considered it a slum. When Janet Farley first came to live in Millers Point, people told her:

“ 'Why would you want to live there? It’s nothing but a dump.' Now people are paying millions and millions to move into the dump.”

In the early 1980s, there was a period of cultural renewal in the area and a growing appreciation of the location and its architecture.

Most of Walsh Bay’s old wharves and warehouses were still abandoned, padlocked and dilapidated – but also the subject of intense opposition from local residents and heritage conservations against the State Government’s plans to redevelop the precinct.

Pier One was redeveloped into a harbourside ‘festival marketplace’, offering restaurants, amusements and retail until it was restored and redeveloped as the Pier One Hotel, opening Spring 1999.

Pier 6/7 was renovated to house a five-storey block of luxury apartments of industrial-modern style.

STC acknowledges the Gadigal and Bidjigal people of the Eora nation who are the traditional custodians of the land on which the company gathers. We pay our respects to Elders past, present and emerging, and we extend that respect to all Aboriginal and Torres Strait Islander peoples with whom we work and with whom we share stories.