A legend of Australian stage and screen, Hugo Weaving has worked with Sydney Theatre company on over 20 productions, readings and workshops over a span of some 35 years.

In that time, he's played some of theatre's great roles, most recently as Big Daddy in Tennessee Williams' Cat on a Hot Tin Roof in 2019. This year Hugo returns to our stage for a haunting tale of mystery and revenge in Wonnangatta.

Here, we revisit some of Hugo's past highlights... Hugo's first show with us was back in 1982, when he appeared in Kaufman and Hart's You Can't Take It with You as '1st Man' in a cast that included Geoffrey Rush and Heather Mitchell. But 1982 was a big year for Hugo, as this was just the first of five plays he performed in for STC that year. The second was a production of A Map of the World, written and directed by David Hare and co-starring Roshan Seth and Tim Robertson, all pictured below. (Photo: Branco Gaica) After this, Hugo played Seyton in a Richard Wherrett-directed production of Macbeth, which also featured John Bell, Robyn Nevin, Colin Friels and Heather Mitchell, followed by David Williamson's The Perfectionist (pictured; photo: Dennis del Favero), which later toured to the USA. The year ended with Hugo playing 'One of the Three Young Men' in a production of Pirandello's As You Desire Me. The following year, 1983, was another busy one, starting with a spectacular production of Congreve's The Way of the World, in which Hugo played Petulant alongside a fabulous cast that included Ruth Cracknell and Drew Forsythe. (Photo: S. Edwards) Next up was the premiere of Thomas Keneally's Gossip from the Forest, alongside Michael O'Neill, Linda Nagle and David Franklin. (Photo: Brett Hilder) Hugo paired up with Angie Milliken in 2000 for a Gale Edwards-directed production of The White Devil, which featured an enormous cast that included Paula Arundell, Bruce Spence and Heather Mitchell. (Photo: Robert McFarlane) In 2003, he played Henry in Stoppard's The Real Thing, again alongside Milliken. (Photo: Tania Kelley) After a three-year break from STC, Hugo returned in 2010 to play Astrov in Uncle Vanya, opposite Richard Roxburgh in the title role. This production toured to Washington in 2011 and went to the Lincoln Center in 2012. (Photo: Lisa Tomasetti) 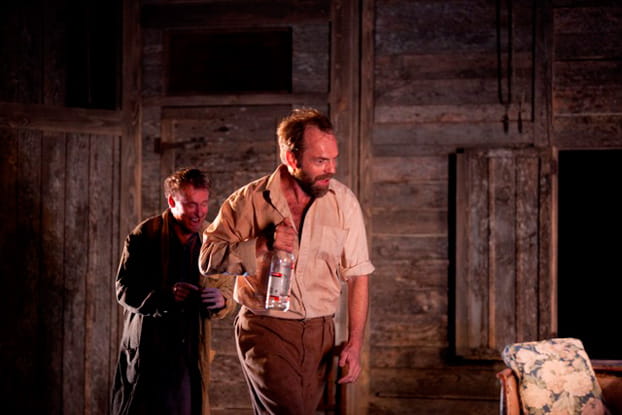 In 2013, he and Richard Roxburgh shone as Vladimir and Estragon, respectively, in Samuel Beckett's classic Waiting for Godot. (Photo: Lisa Tomasetti) In 2014, he took on one of Shakespeare's titanic creations, Macbeth. (Photo: Brett Boardman) After a three year break Hugo returned to the Australian stage in 2018 under the direction of STC's artistic director Kip Williams, playing Bertolt Brecht’s menacing gangster Arturo Ui, a role which won him a Helpmann Award. (Photo: Daniel Boud)